Regattas have flourished along the English south coast since the early 1820s, with Dartmouth being recognised as a key player on ‘the regatta circuit’ since 1822. The dramatic cliffs around the mouth of the River Dart (The Range) form a beautiful natural theatre with many vantage points from where the sailing races can be easily seen. Since 1822, The Port of Dartmouth Royal Regatta has grown extensively – it now offers an extraordinary mix of high-class competitive sailing and rowing, with a plethora of diverse social events and activities. Dartmouth Royal Regatta Sailing Week (organised by the Joint Regatta Sailing Committee – JRSC) represents the sailing elements of The Port of Dartmouth Royal Regatta.

And if you’d like to read a little more ……

The early days …….
In the early 1820s yachting became very popular among the British leisured classes. This interest grew dramatically when King George IV joined the original Yacht Club in Cowes, and gave his consent to its name becoming The Royal Yacht Club. This became The Royal Yacht Squadron in 1833 with King William IV as the head. Inevitably, Cowes became fashionable, and The Solent a gentlemen’s playground.

Soon regattas began to flourish along the south coast. The first recorded Dartmouth Regatta took place in July 1822, where there were 3 sailing races and one rowing race for six-oared gigs. The early regattas in Dartmouth were very popular with members of The Royal Yacht Club (Cowes) and, by 1827 Dartmouth Regatta had developed into a 3 day holiday with thousands congregating to watch the racing. This year there were 4 yacht races on a triangular course in the mouth of the river and 2 rowing events. Social events included a dinner, a Ball and a firework display. Shore events were dominated by wrestling throughout the 3 day regatta. There were no recorded regattas in Dartmouth from 1828 until 1834.

Dartmouth Regatta in 1834 is usually regarded as the first of our current series of regattas; the sailing and rowing were supported, as today, by church bells ringing, an early morning cannon fire, a public breakfast and a Ball. The regatta was a single day event with rowing the major activity on the water. Sailing events developed only slowly over the next 20 or so years, very much lagging behind that of other local regattas.

The early regattas were races between a few large yachts, but watched by ‘numerous gentry on their own yachts’. As interest in sailing grew Dartmouth Regatta developed to include a sailing event for smaller boats; there would typically be two sailing events in the harbour in the morning and a full rowing programme for the rest of the day. 1861 saw the first two-day regatta with the second day set aside for yacht racing in The Range. There were two races – on a 13 mile triangular course in Start Bay. Over this time yachting gained in popularity and huge crowds watched the sailing from the headlands around Start Bay.

Our regatta became The Dartmouth Royal Regatta after a visit by Queen Victoria in 1856; she had been forced to put into Dartmouth by inclement weather. The Queen showed her appreciation of the town by donating £25 to be competed for by local sailors during the regatta held the next day, and awarded Dartmouth the honour of adding the prefix ‘Royal’ to all future regattas.

In 1866 The Dart Yacht Club – becoming The Royal Dart Yacht Club (RDYC) in 1872 – was formed and assumed responsibility for the sailing element of Dartmouth Royal Regatta. On the first day there would be sailing in the harbour (alongside rowing) organised by the Regatta Committee and on the second day there would be racing in Start Bay organised by RDYC. The Dartmouth Royal Regatta quickly gained in popularity with yachtsman – the varied social events ashore meant it occupied a unique position among other yachting centres. A report in the press in 1887 headed ‘Cowes News’ said ‘Yachts move west to Dartmouth – all the fun of the fair will be enjoyed at Dartmouth where, besides the racing, it is the fashion to patronise shows and merry-go-rounds on New Ground in a manner unknown’. In 1888 the usual mix of races included an offshore race from Portsmouth to Dartmouth. Regular press reports continued to report on the first-class yacht racing to be had off Dartmouth.

During the later years of the 19th century, interest in sailing was strong, and in 1873 the Dart Boat Sailing Club (DBSC) was formed. The DBSC was instrumental in encouraging small boat racing all over the South West and assisted in the extension of Dartmouth Royal Regatta to three days, organising its own racing for dinghies on the third day. Towards the end of the 19th century there were actually four clubs associated with sailing and yacht racing on The Dart – the Royal Dart Yacht Club (RDYC), the Dart Boat Sailing Club (DBSC), the Start Bay Yacht Club (SBYC) and a local branch of the Minima Club. The Dartmouth Royal Regatta was held over four days and all clubs organised their own sailing event as part of it. However at the turn of the century, interest in sailing declined, and circumstances forced DBSC, SBYC and the Minima Club to close – with RDYC taking over all the sailing events in Start Bay. At the beginning of the 20th century RDYC continued to organise its own regatta sailing events for larger yachts in Start Bay and the Dartmouth Regatta Committee organised racing for smaller sailing boats on the river. The two organising bodies were essentially ‘working together’ but organising very separate sailing events.

Post-war years ……
In 1946, despite post-war austerity, The Dartmouth Regatta Committee re-instated a limited but very successful three day regatta, with the sailing events organised by RDYC. Starting numbers in the sailing races grew steadily over the next three decades – although this was essentially due to a rise in popularity for dinghy racing. It wasn’t until the 1980s that the bigger yachts started to return in significant numbers.

The Dartmouth Regatta Committee and RDYC started to work more closely to organise the regatta and held regular joint meetings to agree details of the sailing races. In 1949 a ‘Joint Meeting’ was held to review the sailing events, and to note actions for the following year – the first joint ‘Wash Up’ meeting had been recorded. Over the next few years there was much discussion on the location of the sailing; the Dartmouth Regatta Committee wanted more in the harbour for the benefit of spectators while the sailors wanted more in The Range where the sailing was not so ‘fluky’ and the winds more predictable.

After being forced to cancel in 2020 due to the pandemic, a near-normal sailing programme was successfully delivered in 2021 despite the constraints of ‘social distancing’.  Now in 2022, Dartmouth Royal Regatta Sailing Week is part of the 177th Port of Dartmouth Royal Regatta. Although the sailing event is over 170 years old it is only relatively recently it has become an integrated series of races organised by one single body – the Joint Regatta Sailing Committee (JRSC). 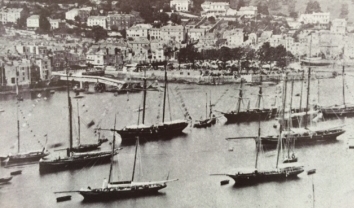 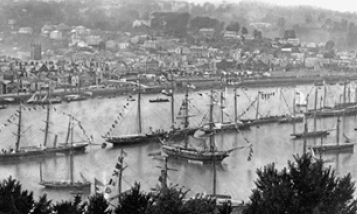